The Monash Games 2013 has been a huge success this year with a great number of student and staff participants. The variety of sports from mixed netball, women's netball, basketball, futsal, volleyball and dodgeball, there truly has been something for everyone!
All the teams have come into the games very competitive and with a burning desire to win, but they also have shown amazing teamwork and respect for their opponents and umpires.
A lot of the students who participated at this year's games were participants for  their first time, which is a credit to all the students at Monash and for Monash Sport & TeamMONASH for putting on such a wonderful event.
As well as promoting a healthy lifestyle and keeping fit, the Monash Games has been raising funds for the Ronald McDonald House Moansh Charity, which is fantastic cause. All of the funds raised will go towards this charity  raise money further help families of seriously ill children being treated at Monash Children’s Hospital.

Victorious Secret showed some great ball movement down the court and managed to keep a pretty high conversion rate with their goals! It definitely was a team effort helping them to victory today, with a strong team all the way down the court.


Team Ballbreakers took out the championship in the basketball finals against eDrbblers 15 - 7. This final was a huge upset for the runners up, as earlier in the day they had won against Ballbreakers.

Both teams showed off their amazing skills with 3 pointers flying and great one on one defense. The great defense work of Ballbreakers made it pretty crowded in the key, causing difficullties at times for eDrbblers to score.

All the teams in the finals today came with a commendable attitude and put on some entertaining matches for all the spectators here at Monash Sport!

Well done for everyone who participated, and congratualtions once again to the champion teams Victorious Secret and Ballbreakers.
Posted by John Monash at 15:26 No comments:

Exciting finals to end Day 2 of the Monash Games

Day 2 of the Monash Games is all wrapt up with the two finals now completed.
Congratulations to the Unigames girls for winning the Netball Grand Final 30-11.

They secured a solid lead from the beginning, which unfortunatley the All Stars could not catch up on. The defense of the Unigames team was very solid and consistant all the way down the court, a great asset that helped the team to victory today. Although a late ankle injury sent suspense to the girls, they managed to push through and consolidate their victory.


There was so much action in the final. Both teams put on a wonderful show, with countless 3 pointers and breathtaking dunks!
Congratulations to all the teams who competed in the finals today. It was great to see every team try their best and have a successful day of sport here at Monash Sport.

Some time on the Sidelines

The volunteers behind the Monash Games

The Monash Games yesterday and today has been a very well organised and coordinated event - made possible by the help and support of the volunteers.
There is a team support crew of about 21 volunteers who assist with the scoring, the collating of results, and all the behind the scenes duties that need to be done. And of course, they are looking smashing in the bright blue Team Monash t-shirts!


Overseeing all the volunteers is Lihn Dang. She is the Project Team Manager, and her role is to look after all the volunteers and help out with the event wherever she can. On the sidelines of a very close basketball match, Lihn's enthusiasm and dedication was evident, which has definitely rubbed off onto the wonderful volunteers.

I had a chat to some of our dedicated volunteers here at the Monash Games to get some insight into these wonderful people who are taking time out in their holidays to support the games.

Down at the basketball courts, Davis Yap is the man in control of the electronic scoreboard, keeping all the players informed about the scores. It may seem like an easy job to press the buttons every time there is a goal, but the stakes are high as Davis told us that, "I don't want to press the wrong button!"

Davis is studying his Masters of Psychology at Clayton Campus and during his previous years at Monash, he has always got involved in sport as an athlete. Over the past three years, Davis has participated in the Mother's Day Classic and the Melbourne Marathon. This year, he told me that he wanted, "to try volunteering instead, to see what happens behind the scenes rather than as a participant." The main reason why Davis wanted to volunteer is to get some experience and to meet new friends, both which are what the Monash Games is all about. 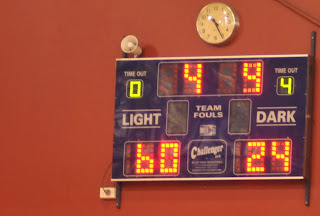 Down at the Stadium Alex Blashki and Gloria Chan are busy with the Netball scoring. Both Alex and Gloria are from the Caulfield Campus, but feel pretty confident finding their way around the Monash Sport complex at Clayton!

Alex is a fourth year student studying a Bachelor of Business. Alex was at the Games yesterday, helping out with the dodgeball scoring and timing. Now in his fourth year at Monash, he said that he had not really got that involved in any events previously, but wanted to "give back" to the community by volunteering. Alex was impressed by the organisation of the event and how all the games run and adhere pretty tightly to the schedule, ensuring the success of the Games overall.

Working with Alex on the Netball sidelines is Gloria, who is studying a Masters of Business. She is volunteering in the Monash Games for the first time as she loves sport and plays social netball and basketball in her spare time. Normally she volunteers with another friend, and they volunteered together at the Mother's Day Classic and the Mega Swim. However, her friend is overseas at the moment, so she did not have her usual wake up call at 7am! She said it was a bit tough waking up early this morning, but she is glad to meet new people!

The volunteers at the Monash Games should be congratulated on their efforts and support, as their help and assistance definitely maintains the great success of this event.

After a great effort with dodgeball and futsal in yesterdays competition, the Orion Hunters from Orion College are here today at the Monash Games to compete for the title of basketball champions.  Today, the basketball team consists of Gwen, Ahmed, Zoe, Kaz, Griffith, Annie and John. So far, they've had a smashing effort out on the court and are having a great time competing in the Monash Games. 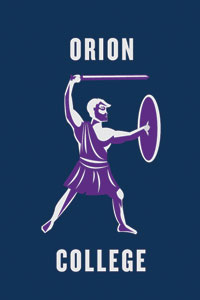 Adam Fernandes, college coordinator of Orion College is here cheering on the Orion Hunters and has hopes of sending the team to the Uni Games next year. Today they are here for some social sport and to practice working together as a newly formed team.

Orion College is non-residential college that was formed at the start of 2013. It is aimed at giving non-residential clayton students a sense of community. It is based off of the success of Monash Residential Services and the Halls of Residence providing pastoral support, programs and social events for students to get involved in.

The Monash Games are and have been a great social event for them to be involved in which is exactly why they have been here over the past two days. A bit of friendly rivalry was held on the courts yesterday with the Orion Hunters competing in dodgeball against Pegasus College, the non-residential college from Caulfield. Pegasus College did well in the competition taking home the silver medal. Perhaps the teams will be back to battle it out for gold in dodgeball in next years Monash Games.

Well done to all teams playing in the Monash Games and thank you for your support of the Ronald McDonald House Monash! 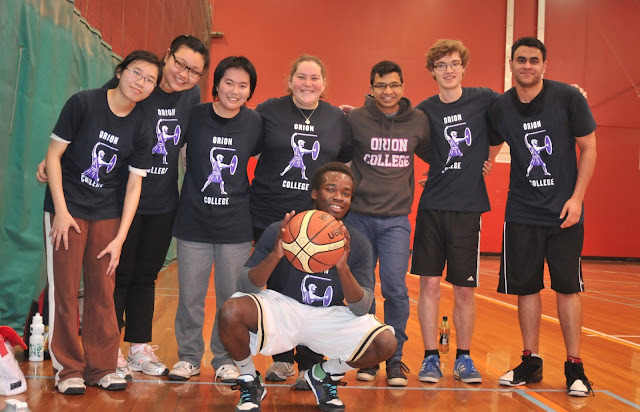 Orion Hunters - Basketball half time at the Monash Games 2013
Posted by John Monash at 11:48 No comments:

Congratulations to the Team Homicide Squad have won the 2013 Monash Games Futsal competition. 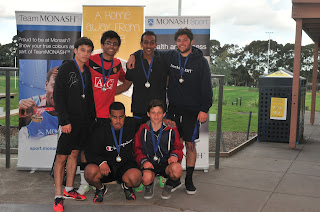 It was a close game between Team Homicide Squad and Team Maestro, but the speed and intricate foot skills of Homicide Squad won the day 2-1.
Both goal keepers played fantastically during the final, saving some ferocious attacks at goal.
The futsal ball itself is smaller than a standard soccer ball, making it fly through the air and really zip around the court. Team Homicide Squad employed some very solid teamwork and great coordination between the players to move the ball swiftly down the court. There was great communication between the players on the court and also great encouragement. 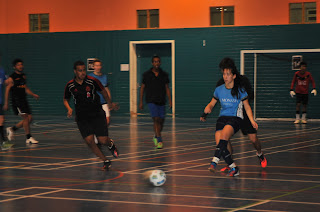 Congratulations to Team Maestro for making it to the finals after a long day of futsal playing and for all the teams that participated in the Monash Games. 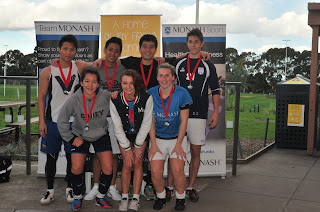 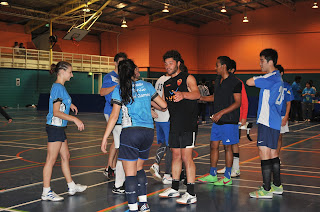 Congratulations to the Monash Uni Games Team on winning the 2013 Mixed Netball Grand Final!
They raced to victory with a win over the Gippsland City Team 34-6. 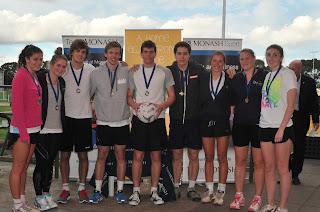 The Uni Games Team got a pretty comfortable lead in the early stages of the first half, leading 19-4 at half time. The shooters worked exceptionally well together and rarely missed a shot!
A highlight from the Uni Games shooting team-up was the high lobs of the attackers into the GS. It seemed to work every time and there was little that the oposing defenders could do to stop the lobs from rolling in and being easily converted into goals. 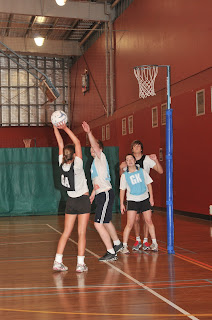 For the second half, with a slight change in positions, Uni Games kept on playing very strong netball, making it obvious that their team drills and awareness of each other on court was very solid.
The runners up, Gippsland City, did not show any signs of giving up despite the score line and they fought for every goal. They played some great, consistant netball, but unfortunately it was not enough to take home the gold medals this year. 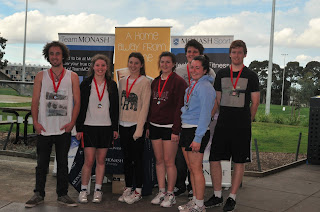 Hopefully the Monash Uni Games Team can remain a strong competitor when they represent Monash at the Australian University Games in September.
Congratulations once again to all the teams who participated in the Monash Games Mixed Netball! 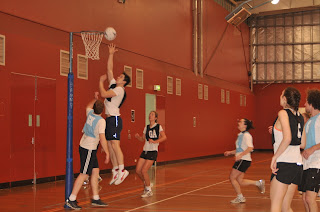